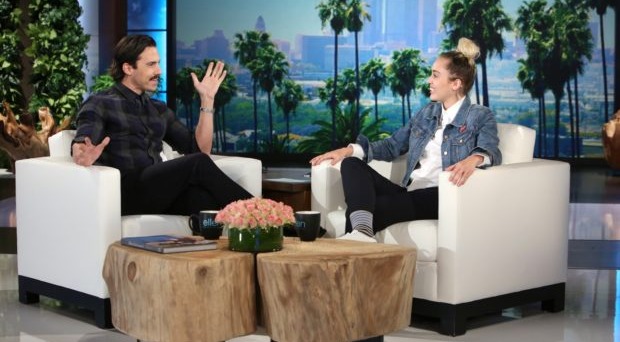 American singer Miley Cyrus was in charge of The Ellen Show subbing for its regular host Ellen DeGeneres. The show is a Television sitcom which has added humour in people’s daily lives.

On the October 3rd episode of The Ellen Show, American actor Milo Ventimiglia was invited as the guest. The actor, renowned for portraying the role of Peter Petrelli in NBC Television series Heroes, was there on the show to promote his new series This Is Us.

Ellen’s show, besides painting lives with the colour of humour and laughter, has also helped in raising support for social causes. Actor Milo Ventimiglia also took part in one of Ellen’s annual tradition of splashing an attractive male star to raise money for breast cancer research.

Before the actor, some of Hollywood’s celebrated names like Jerry O’Connell and Tyler Posey have attended the show and have unveiled their body and gotten wet for a good cause.

The actor, who previously has unveiled his body, was no different from the past. He seemed excited to be able to contribute to a good cause. Besides getting wet for a good cause, the actor also talked about his new series “This is us”.

Host Miley Cyrus and the 39 years old actor Milo chatted, besides his show, about appearing in the new Gilmore Girls revival before the pair kicked off the Breast Cancer Awareness Month with a Splash Tank round. Ulta Beauty will put $10000 towards breast cancer research for every celebrity-soaked in the Tank.

His new series is a family drama which already has accumulated more than 10 million viewers on its debut. As per NBC, the series has already picked up a full-season speed and its current total episode is 18.

Sharing more details about his new television Sitcom, the actor went on to say, “It’s got, heart. You know what I love about it? It’s hopeful. There’s a whole landscape of you know, aliens invading planets, and scandal and this is inherently good.”

His new series This Is Us has been season’s breakout hit. The actor along with all other crew member remain hopeful that the series goes on to be a superhit.