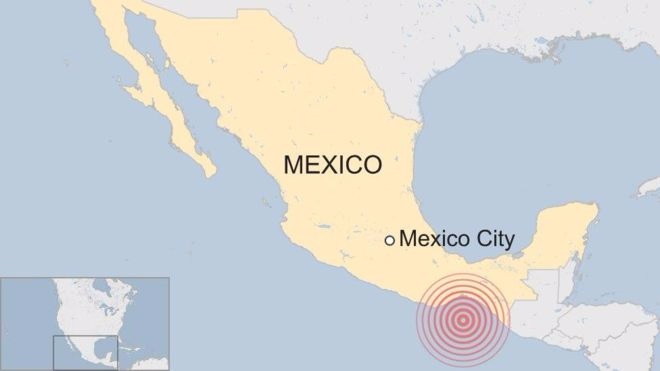 A strong earthquake has hit the southern coast of Mexico, near Guatemala border, reports the US Geological Survey.

According to the Pacific Tsunami Warning Center, it had a magnitude of 8.1 and depth of 20 miles (33 km). This is the strongest earthquake since the one in 1985, which caused thousands of deaths.

A tsunami of 0.7 m / 2.3 ft  has hit the coasts. According to the NWS Pacific Tsunami Warning Center, “hazardous tsunami waves are forecast for some coasts.”

A Tsunami warning has been issued by the Tsunami Warning Center, which has warned that a Tsunami could hit the coasts of Mexico, Guatemala, El Salvador, Costa Rica, Nicaragua, Panama and Honduras within three hours.

Mexico City Mayor Miguel Angel Mancera reported to Televisa that there are electrical outages going on in Mexico City but no reports of collapsed buildings have been reported yet.

In Matías Romero, Oaxaca, a hotel collapsed, people are trapped and waiting to be rescued. Three have been reported dead in Chiapas and two in Tabasco.

One of our close friends from Mexico sent us this.. look at how much the light poles move ? pic.twitter.com/tyjL6nTLed

An 8.1 #earthquake just hit Mexico. Mother Nature is not having it right now with us. Prayers to those affected, prayers to the world.