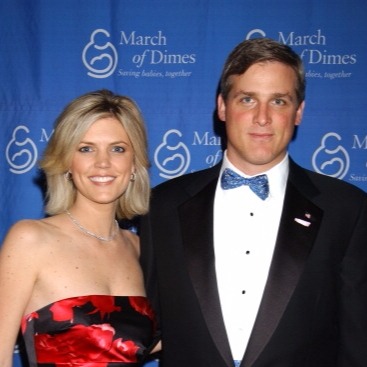 Melissa Stark, a well-known American TV personality and reporter of NFL Network, she is married to Michael Lilley. She has four kids with him; which includes a pair of twin daughters.

Melissa dated her husband Michael Lilley for a long time before marrying. They got engaged on 19 June 2000 when Michael proposed her to marry him. The couple exchanged their wedding vows on 26 May 2001.

That year 2001 brought another happy news to Stark when she was offered a job of sideline reporter at Monday Night Football (MNF) of ABC. She immediately accepted the work proposal which was made by the ABC’s executive producer.

She worked for Monday Night Football for three seasons before leaving in 2003 to begin a new chapter of her life with husband Mike. On 23rd August 2003 she gave birth to their first child named Michael Lilley, Jr.

Stark became a mother of her second kid, a son again, a few years afterward. Lastly, she gave birth to twin daughters, making her family balanced with an equal number of sons and daughters.

At present, Melissa and her happy family reside in Ramsey, New Jersey. As per a 2012 news, she also owns a home in Sea Bright, New Jersey.

Melissa Stark was born to an eye surgeon named Walter Stark. Her father has World famous Wilmer Eye Clinic at Johns Hopkins Hospital. Stark earned her University degree from studying at the University of Virginia.

Stark began her professional journey working as a reporter for Virginia Sports Marketing. In 1996, she was hired by ESPN as host of the show called Scholastic Sports America. Likewise, she joined the ABC Sports in 2000 where she initially worked as the lead sideline reporter for Monday Night Football. As of now, she is working as a sports reporter for NBC network.

Mainstream sports reporter of NBC, Melissa Stark has kept perfect balance in her personal and professional life. The 15 years long marriage has been strengthened by the joy of four children and there seems to be no problem in Melissa Stark’s marital life.