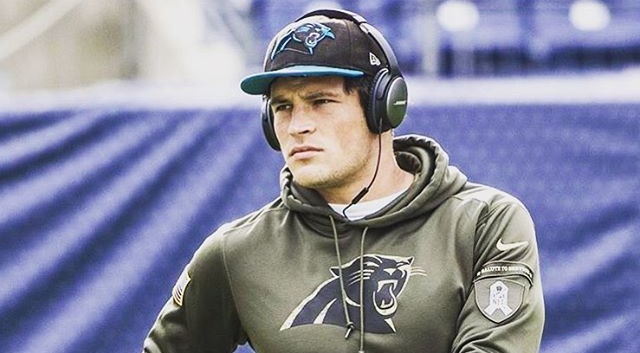 Luke Kuechly is an American football linebacker who plays for Carolina Panthers in the National Football League (NFL). He made his name as a linebacker with his collage team Boston College. In his remarkable career he has won numerous honours including the NFL Defensive player of the year award in 2013.

Luke Kuechly since his childhood has love for football

Luke Kuechly was born as Luke August Kuechly on 20th April 1991 to parents Eileen and Tom Kuechly in Cincinnati, Ohio. Besides him the Kuechly family has two other sons, John and Henry. Luke Kuechly enrolled his academic from St. Xavier High School in Finneytown and later joined Boston College in Chestnut Hill. Since his High School days he was interested in football. In 2007 he put in a marvellous defensive performance which saw his high school team claim a 15-0 undefeated streak to claim the Ohio State title. His brilliant performance also saw his teams voted as the best high school team in the United States.

His love for football landed him numerous honours and awards

His high school ended in a high and his college career he didn’t disappointed. He joined Boston College for his academics and maintained his high school form in his college days. As a freshman in 2009 he quickly was placed in the team after regular linebacker Mark Herzlich announced he would miss the rest of the season. In his first season he finished with a total of 158 tackles which included 87 solo tackles. In doing so he led the team in tackles as a freshman. His performances landed him 2009 ACC Defensive Rookie of the Year and 2009 CFN All-Freshman Defensive team. He enjoyed 3 seasons with Boston and in that time he set BC and ACC record with 5323 tackles, overcoming the record previously set by Stephen Boyd with 524 tackles. His time with Boston he won several awards including, Lombardi Award, Bronko Nagurski Trophy and Lott IMPACT Trophy. He ended his college career in high before joining professional football team.

His talents landed him a whooping contract in his professional career

January 6th 2012, Luke Kuechly decided he would not prolong his college career as he wanted to enter the draft for the upcoming NFL season. He was placed as a top rated linebacker available in the draft and he was picked as a first linebacker and 9th pick by Carolina Panthers. Five months later Kuechly penned a 4 year deal with them which would see him earn 12.58 million dollars. In his first season he picked up NFC Defensive Rookie of the month award in December, where he recorded and astonishing 59 tackles. He finished on a high in his first season where he recorded 164 tackles which saw him lift the AP Defensive Rookie of the year Award followed by Defensive rookie of the year award from Pro Football Weekly. He spent further two years with the Panthers. His performance saw his level rise from a rookie to a professional. In September 10th 2015, Kuechly penned a 5 year extension with the club which would see him earn a whooping 62 million dollars in the process.

His professional success has been matched by his personal life

Footballer Luke Kuechly likes to keep his personal life under wraps due to which many details about him and his love interest have not been disclosed. The Panthers linebacker is believed to be in a blissful relation with his sweetheart Shannon Reilly. In their time together no reports of the couples facing conflicts or differences in their relation has come out. The couples are likely to tie the knots in the near future but for now the couples seem to be focusing in their career rather than their personal lives.

Luke Kuechly in his career as a footballer has accumulated numerous success and gather a large fan base. His love for football began when he was in 4th grade and since then football has been a part of his life. His dedication and love for the game has made him one of the best in the United States. Besides that his footballing career has also landed him with satisfying finances. Currently his estimates net worth is said to be around 24 million dollars.