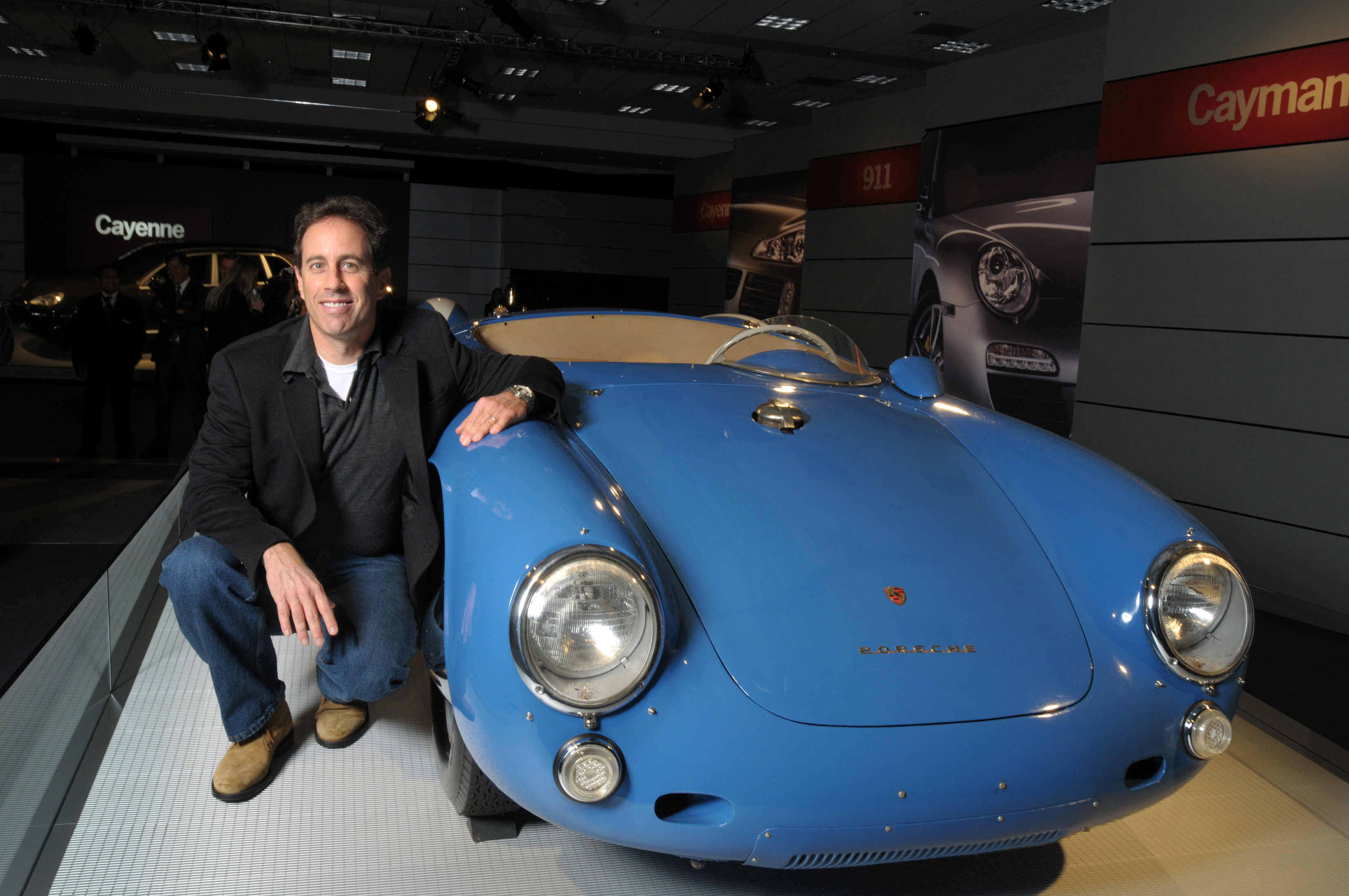 For a car maniac, it is a dream to collect current and vintage cars, and Jerry Seinfeld is very far from being an exception. Furthermore, the American actor, producer, host, and avid car collector Seinfeld holds one of the most extensive and most valuable car collections in entire America. Recently, he auctioned off 15 cars from his collection worth over $22 million!

With a whopping net worth of $950 million, Jerry owns around 150 cars. Moreover, Seinfeld even has his own fleeting company to take care of his rides. A part of the Porsche collection is housed in Manhattan at the $1.4 million two-story garages. Today we bring you the ten most expensive and luxurious cars from Jerry’s massive collection.

Dubbed as “one of the most genuine 550s in existence,” it is one of the most beautiful cars he ever owned. In 1955, Porsche only 70 cars like this. Furthermore, this car sold for $5,335,000 in 2016. Again, Jerry sold the car at an auction held by Jerry under the management of Gooding and Co. in Amelia Island, Florida.

The car owned by Jerry Seinfeld holds a plate No.40 of the 52 of this model built between 1949 and 1950. An aluminum shell, carefully hand-hammered the body of this car.

The car featured a 4-cylinder engine producing 35 horsepower. It was one of the first Porsches to be road certified, air-cooled and rear-mounted.  Seinfeld’s 356/2 was used as a development car to perfect aerodynamics & mechanical components for the 356 L racecars at the Le Mans sports car race.

Dante Giacosa designed eye-catching tiny beauty, which became one of the highest in-demand in the post-war scenario. It redefined the term ‘microcar’ with its small design of fewer than 3m featuring a tiny 479cc two-cylinder air-cooled engine.

With 13 horsepower, it can go up to 85 km/hr. Seinfeld purchased this car in 2008. And after he bought it, a minor accident occurred while driving his vehicle shortly.

The Karmann Ghia came out with two versions: coupe and convertible. This classic is powered by a 4-cylinder engine and is worth $10,000–$45,000. Seinfeld showed off his Karmann Ghia in of the episodes of the first season of Comedians In Cars Getting Coffee with Joel Hodgson.

Named after a specialist, Henri Joffroy, this car holds a catchy outlook that anyone would fall in love with. This car is worth possessing, featuring a 6-cylinder boxer engine.

It had participated in various races in Monte Carlo. We only get a brief glimpse of this Porsche at the end of the episode of CCGC featuring Mel Brooks and Carl Reiner.

This Porsche model is nothing short of any celebrity as it was prominently featured in CCGC. It has also participated in various racing competitions.

However, Jerry Seinfeld auctioned off the car in Amelia Island, Florida. At first, the bid for the vehicle was estimated to reach $4 million. But, it came near $2.6 million and hammered sold.

Porsche 993 ‘The Speedster’ was a variant model of 993, with a redesigned interior and lowered roof. The company built only two of these cars. And Ferdinand Alexander Porsche owned one and another for Seinfeld in 1998.

Featuring a two-door coupe body, the Porsche 911 possesses a 6-cylinder engine. Supporting a 160 horsepower, this car was quite a treat for the people in 1966. With its “sand” body color and tan interior with wood details, Seinfeld called it “pure car heaven.”

Considered the holy grail of Porsches, most racing enthusiasts call the 1973 Porsche 911 Carrera RS a race car for the street. CCGC featured the car in an episode. Initially, Porsche released 500 units, which sold in less than a week. And so, the company later released 1,590 more in the production run.

The car runs on an air-cooled 6-cylinder engine with Bosch mechanical fuel injection.

This particular Porsche is remembered as the ultimate car of the modern era. Besides, it certainly is a jewel in a car collection.

Out of 337 manufactured in the late 80s, only a few exist now, and Seinfeld has one housed in his garage paying $700,000. Moreover, the car has a twin-turbo six-cylinder boxer engine and can go at a top speed of 195 mph.