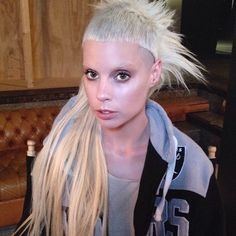 Yolandi Visser, the renowned vocalist of the South African RAP/Rave/ZEF musical group Die Antwoord is speculated to have earned a total net worth of $4 million from her music career. The super-hot and talented rapper Yolandi is still a part of the band Die Antwoord and it is revealed that the group holds a net worth of $3 million. Yolandi’s partner Watkin Tudor Jones “Ninja” is also a part of the band with whom she has a daughter named Sixteen Jones.

Yolandi started her musical trip with being a part of some music and art group named The Constructus Corporation and MaxNormal.tv. During the time she was working with the musical group, she showed up in many of their music videos.

However, the talented music artist didn’t ascend to popularity until she joined RAP/RAVE group called Die Antwoord. The popular musical group consists other members like Ninja and DJ Hi-Tek. Till date they have released three studio albums – $O$, TEN$ION, and Donker Mag which have earned all of them widespread acknowledgment and appreciation.

Apart from the singing vocation, Visser also became famous through making appearances in movies such as Chappie and Picnic.

It is known fact that she is a rapper, but, what about her personal life. There is sad news for all guys, who are dreaming to get married her. She is not living single life right now.

Let’s have some of the unknowns facts about Yolandi Visser which her fans would definitely want to know.

Yolandi is in a long term relationship with her fellow band member Watkin Tudor Jones, aka, Ninja. They have been dating for a long time but they have not made the decision to get married yet.

In 2006, Visser announced that she is pregnant with Ninja’s child, following which she gave birth to a baby girl named Sixteen Jones.

Recently a year back, she shared a picture with her daughter Sixteen Jones. Take a look!

Yolandi’s little girl Sixteen Jones is currently 9 years of age. She has often made appearances in some of the magazine covers with her popular parents. She looked really cute on the cover of Rolling Stone Magazine where she was seen trying to imitate her parent’s intense and serious look.

Yolandi has adopted a street kid named Tokkie in 2010. He was 9 years of age when she decided to take care of him. Tokkie belongs to a poor family so she made the decision to take care of him at the weekend time. Later she started giving full time to him.

Visser said “I’ve always had that maternal thing; that connection with street kids and people who are misfits. I saw so much potential in Tokkie but I knew there was no hope for him on the street. No one’s gonna give a shit. Now he’s blossomed and become this enchanting boy.”

Eminent rapper Yolandi Visser is dedicating her time in the music field since 2001 and she is still associated with the music by being a part of Die Antwoord. The huge net worth of $4 million has made it possible for her to live a blissful life with partner Ninja and their daughter Sixteen Jones. Moreover, the financial strength has also helped Yolandi Visser to adopt a boy into her family.