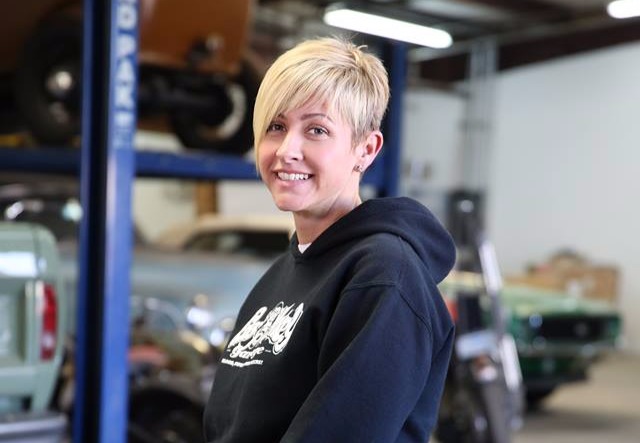 Hi! I am Flo, Welcome to E Celebrity Facts ! Today, we are taking a look at the life of office manager of Gas Monkey Garage and the star of the show, Fast N Loud, Christie Brimberry. Her husband works for Richard Rawlings, but who is he? Watch the full video to find out.

If there is anybody, Gas Monkey Garage and Fast N Loud fans love more than Richard Rawlings and Aaron Kaufman, then it has to be Christie Brimberry.

The beautiful and down to earth office manager of Gas Monkey Garage is the one who gets the most attention from fans.

She is also the assistant to the Garage owner, Richard and manages the monkeys in the shop.

Christie has been a manager for a long time and has thus earned the title, “Zoo Keeper.”

She is also a shrewd negotiator who occasionally negotiates in Richard’s behalf.

So, how did Christie end up working for Richard and Gas Monkey Garage?

She explained in a video that Richard asked her husband if she could work for him and then started her journey to being a loved TV star.

She never thought she would be in the limelight and be one of the famed stars of Fast N Loud, thanks to her husband, who was already working for Richard.

Her husband, Daren Brimberry is a hairstylist for Rawlings. So, basically, Richard cannot make do without both, Christie and Daren.

Daren also works for ‘Muse the Salon’ in Dallas and has a Instagram account but has not posted anything since December 2015.

In addition to managing the garage, Christie also manages her home where she has a husband and six kids.

Although she appears in a reality show, she has tried her best to keep her personal life private and only posts selected pictures of her family.

She often posts pictures of her oldest child, Malik Grinage who is a barber and has opened Blade Craft Barber Academy.

She also shares pictures of her oldest daughter, Jordan Grinage who is dancer.

Her youngest child is a daughter who started her 2nd grade in 2016.

Christie is a tattoo lover and has a sleeve tattoo on her right arm and a tattoo around her bellybutton.

She was diagnosed with thyroid, trachea and lymph nodes cancer in August, 2016 and underwent a surgery in October of the same year.

Now, she seems healthy and has continued to manage the garage and appear in the show.