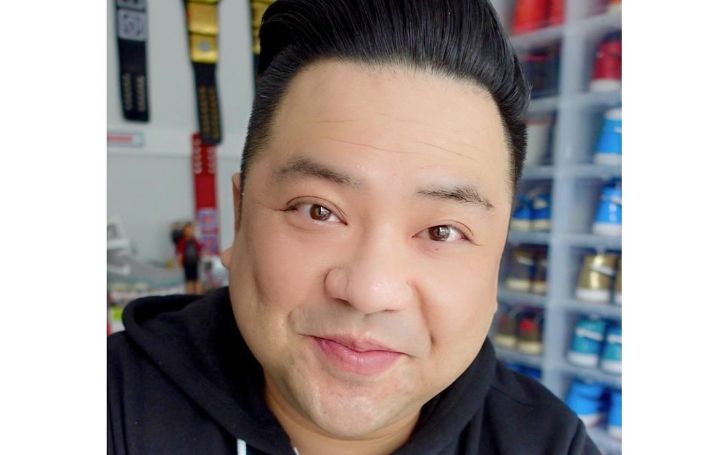 Andrew Phung is a Canadian comedian and actor. He is well known for his role in the sitcom Kim’s Convenience. Phung started his career in 2008 after he joined the comedy group Sciencebear.

Phung’s first TV appearance was on Let’s Talk English, where he was the host. In addition, his first movie was Little Italy. Furthermore, he is the lead and co-creator of the Run The Burbs series.

How old is Andrew Phung?

Andrew Phung is 37 years old. Phung’s exact date of birth is not available to the public. However, Plung was born in 1985. Moreover, like his fellow cast member Julie Nolke, Phung was born in Calgary Canada. Likewise, Andrew the start of Run The Burbs hails of Canadian nationality.

Andrew was born and raised in Calgary, Alberta. He was born to a Vietnamese father and a Chinese mother. However, the identity of his parents is unclear.

Phung attended Bishop Mcnally High School. Besides, he studied economics at the University of Calgary and worked as a non-profit director. Whatsmore, Andrew joined the Loose Moose Theatre Company when he was 16 and is currently a senior ensemble performer and instructor with the theatre.

Is Andrew Phung in a relationship?

Andrew Phung is married to Tamara Sharpe. The couple met at a nightclub called Outlaws in Calgary. Phung was celebrating his birthday while Sharpe was out with her friends. A mutual friend introduced the pair.

Both Andrew and Tamara decided to skip the event and went out together. To impress Sharpe, Phung tried to dance to a Jamiroquai song. However, he slipped in a puddle of beer and fell flat.

Is Rakhee Morzaria from Run The Burbs Married?

What is Andrew Phung’s net worth?

As of 2022, Andrew Phung’s net worth is between $1 million to $5 million. Phung makes his primary income as an actor. In addition, he also earns as an improviser and a comedian.

Andrew was named one of Calgary’s Top 40 under 40 by Avenue Magazine in 2009. He also co-wrote and starred in two seasons of Cowtown. In addition, the start has been a five-time Canadian Screen Award winner for Best Supporting Actor in a Comedy Series.

Besides, Phung is involved in a non-profit organization called Youth Central. The organization helps youth get involved in their communities. In addition, Andrew is the co-founder of an online sneaker group called YYCSolediers.

The actor enjoys sharing his life with his fans. He does not mind sharing pictures of his family. In addition, he also uses his social media to promote his work.