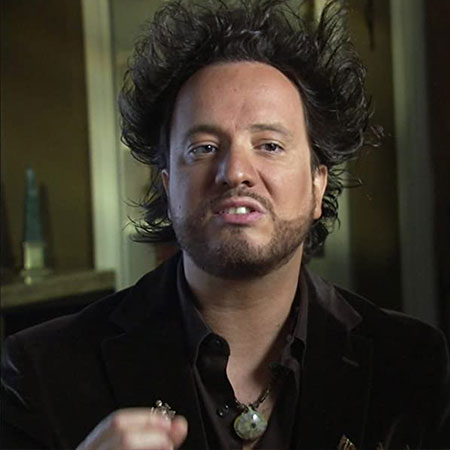 You might either know Giorgio A. Tsoukalos from History channel’s ‘Ancient Aliens’ or his countless memes on the internet.

The ruffled haired guy, who passionately talks about aliens came to prominence from the show, but there’s a lot about him people don’t know.

Here are five interesting facts about the internet sensation

Giorgio was born and raised in Switzerland to parents from a Greek-Austrian heritage.

This might be the reason why he is fluent in five different languages: English, Greek, German, French and Italian.

Giorgio’s knowledge of ancient history exceeds what we have seen or heard from him on ‘Ancient Aliens.’

He is also the editor and publisher of an online and print magazine called Legendary Times.

It is the only publication in the world that concentrates on the subject of ancient astronaut theory.

Before appearing on TV, Giorgio worked as a bodybuilding promoter who also volunteered in the renowned Mr. Olympia bodybuilding contest.

He graduated from Ithaca College in New York with a degree in sports information and communication.

The man, who has cited crazy theories about aliens visiting the Earth and even having a hand in building the pyramids, had a real UFO encounter in 2014.

He has claimed that he saw the UFOs during the Contact in the Desert Conference at Joshua Tree Retreat Center, California.

Around midnight, he and 26 other people saw stars inside the Big Dipper which began to move before eventually vanishing in the night sky.

As crazy as it sounds, his expertise on extraterrestrial beings has made him a certified millionaire, with a whopping $2m as of 2018.