Skip to content
Home » Entertainment » Is A. J. Allmendinger ready to wife up girlfriend Tara Meador?

Is A. J. Allmendinger ready to wife up girlfriend Tara Meador? 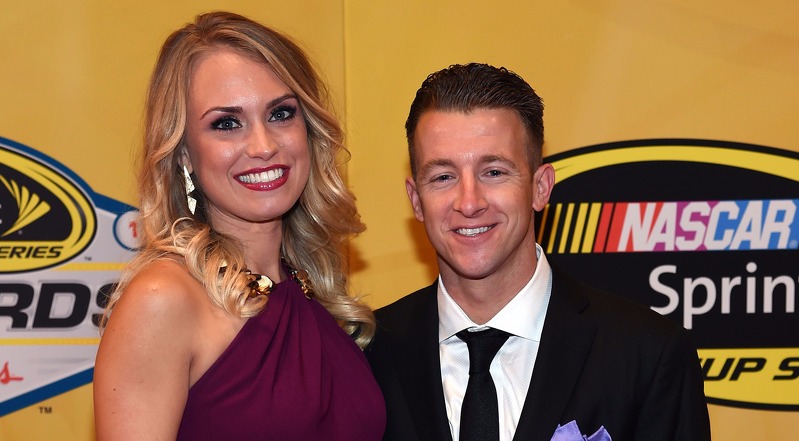 Recently, in January 2017, stock car racer A. J. Allmendinger and his girlfriend Tara Meador were spotted by the kiss cam while they were enjoying the Charlotte Hornets match. And guess what? Allmendinger nailed it!

Allmendinger began dating Meador in 2015, following which he has featured his girlfriend many times on his Twitter. Only recently, on February 7, he took to Twitter to wish her a happy birthday and shared a picture of them at a stadium.

Happy birthday to this beautiful girl that I love very much… @_TaraLea pic.twitter.com/Le6UQho9Nm

Meador is as much a sports fan as A. J., and in fact, she is a huge boxing enthusiast. Besides, she is a big fan of her partner which is evident from the love she displays for him on her Twitter.

This has us wondering if wedding bells are in the future for the lovely couple.

Allmendinger even shares a cat with girlfriend

Allmendinger and Meador adopted a pet cat in 2016 after rescuing it from under a dumpster in a North Carolina neighborhood. They have named it Mr. Tickles and fun fact – he even has his own Twitter handle @tickles_thecat.

Mr. Tickles has been a great companion to the couple and even a traveling mate. The couple takes him wherever they go. Allmendinger has said, “So we’ve got a little cat backpack and he gets in it and gets under the chair and goes to sleep and it’s good entertainment throughout the course of a weekend when I’m stressing myself out.”

Mr. Tickles has definitely played a role in maintaining the couple’s stress-free relationship.

Tara Meador would be A. J. Allmendinger’s second wife

If Allmendinger does decide to pop the question to Meador, it would be his second time. He was previously married to Lynne Kushnirenko, a Canadian model.

He married Lynne in January 2007 and they were together for nearly 5 years. The two made many public appearances together while they were married.

The marriage ended in divorce in 2012. That year was not particularly a good year for Allmendinger as he faced suspension from Coke Zero 400 after he failed a random drug test in July.

Allmendinger vowed to get back on the road after the drug incident and looks like he is back on track. He’s in a happy relationship and had the best finish of his career at Daytona in 2017.