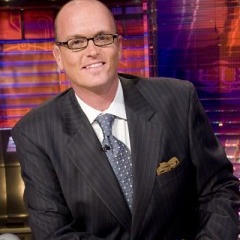 The acclaimed sportscaster, Scott Van Pelt is widely known as the co-anchor of the ESPN’s daily sports news show SportsCenter. He is also known for serving as a co-host of sports radio talk show SVP & Russillo.

Scott Pelt took birth on 4th August 1966, in Brookeville, Maryland. He was born to parents, Sam Van Pelt and Cathie Mathis. He spent his childhood days growing up in Washington.

Talking about his educational journey, he did schooling from Sherwood High School. From the same school, he held his high school degree as well.

Then he joined the University of Maryland to study Radio/Television Broadcasting and Film. He came out holding a degree in 1988.

The hardworking and dedicated sports personality, Scott Pelt started off his journalism career from working at WWTG-TV. After serving a few years there, he left the channel in 1990 and joined The Golf Channel.

In 2001, he joined the popular sports network ESPN. At the network, he was appointed to work as a top golf reporter where he is responsible for preparing reports of the major golf tournaments.

The celebrated sports anchor, Scott regards his interview with Tiger Woods as a major breakthrough moment of his career. As a sports correspondent at ESPN, he covered major events such as The Masters, the British Open, and the PGA Championship.

Apart from being a TV star, he is also known as an anchor of ESPN radio. He co-anchored the radio program entitled Tirico and Van Pelt, with Mike Tirico. However, the program was called off in 2009 and he was assigned a new program called The Scott Van Pelt Show.

Scott is still associated with ESPN and is dedicating his time hosting the three hours long talk show SVP and Russilo since 2012. He signed the contract with new terms with ESPN in 2012.

After the incident, he refused to pass any remarks to media’s question. However, he called Bud Selig to make an apology and accepted that his words were little raucous.

As per his personal life, he has been married to Stephanie since 2011. His lovely wife has worked for ESPN’s college football programming as an associate producer. It’s not confirmed whether she is still associated with the channel or not.

Scott is living a wonderful married life with wife Stephanie now. The 46 years old hard working sports anchor has not let his age hamper his work.

He still looks young and energetic at this age. With a handsome salary of 2 million dollars per annum, he is leading a luxurious life with his family.

Nominated for Emmy Award in 2011, Scott has great sense of humor

Scott has an amazing height of 6 feet and 6 inches. He also has a great sense of humor. He has many admirers all around the globe. His height and hairstyle have often become a matter of talk on his shows.

The fun loving person has always something to make his radio shows worth watching. His mesmerizing sports commentary skill is simply superb.

Likewise, his devotion towards work has bagged him much appreciations. In 2011, Scott was nominated for Sports Emmy Awards in the category of Outstanding Sports Personality-Studio Host.

Many interesting facts related to this charming media personality can be found in different websites. His recent news updates can be obtained by following him on twitter @notthefakeSVP.