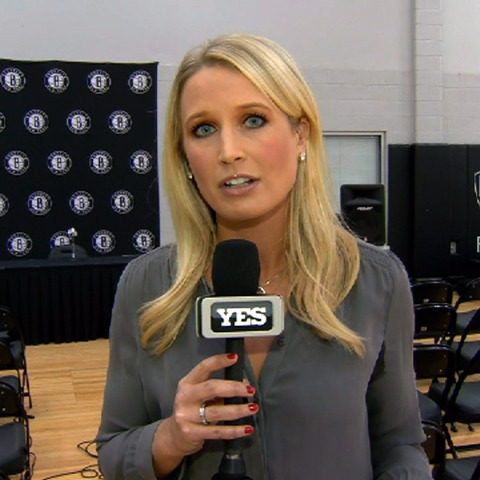 She also covers for the Nets within its game telecasts and pre and post-game shows, the Nets Magazine series, other Nets programming and on the YESNetwork.com.

Kustok was born on December 17, 1981, to father Allan Kustok who was a businessman and mother Anita ‘Jeanie’ Kustok. She spent most of her childhood in Orland Park, Illinois.

She was interested in sports from a very young age and played volleyball and basketball in her high school. She is a graduate of Communication/Media Studies from DePaul, Kustok where played Basketball for the Blue Demons women’s basketball team. She was the captain for her senior session.

Kustok was also an assistant for the women’s basketball coach at DePaul helping the team into the NCCA Sweet Sixteen for the first time during the 2005-2006 season.

She has an older brother Zak who is now a businessman. Her brother previously played as a quarterback for the Northern Wildcats football team.

She completed her Master’s Degree in Communication in the year 2010 from DePaul. She was inducted into the Chicagoland Sports Hall of Fame on 19 September 2012.

In the beginning of her television career, she worked as a sideline reporter and an analyst for ESPN covering events like men’s and women’s basketball, college and high school football. She also worked a substitute anchor for the network and substituted as sports anchor WMAQ-TV. She has worked as the TV sideline reporter for the Chicago Bulls, Blackhawks, White Sox, Cubs, etc.

Besides, she had the experience of hosting College Sports Minute and working as a freelance sports reporter for the sports channels like WFLD-TV and Versus.

Secretly married or dating someone: Does Sarah Kustok has a boyfriend?

Not much is known about her personal life. As she tends to keep her personal life away from the media it’s very difficult to say if she is still single or seeing someone. As no reliable sources have published the news of her wedding yet, it would be safe to assume that she is still unmarried.

However, in the past, there was a rumor that she was dating an American footballer who isn’t yet identified but she has neither affirmed nor denied the rumor. Let’s hope, in the right time, she might go public about her relationships but for now, it’s all a secret.

Sarah and her entire family faced an unimaginable trauma when her father was convicted of the murder of her mother. Though initially, he tried his best to prove himself innocent, eventually he was found guilty was sentenced 60 years in the jail. He was declared murderer of his wife in March 2010, following almost 4-week trial along with nearly 2-hours of jury deliberations.