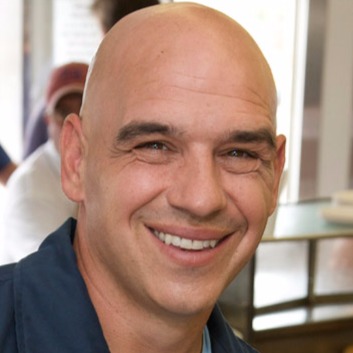 James Beard Foundation Award-winning chef Michael Symon is highly appreciated for creating a boldly flavored yet highly satisfying dish. He has four restaurants Lolita, Lola, B Spot and Roast in US’s heartland. Apart from creating magical dishes in his kitchens. the celebrity chef has made multiple television appearances as a host and judge. In 2010, he graced four cooking shows with his presence. He hosted Cook Like An Iron

The celebrity chef has made multiple television appearances as a host and judge. In 2010, he graced four cooking shows with his presence. He hosted Cook Like An Iron Chef and Food Feuds, competed on Iron Chef America and judged the third season of popular The Next Iron Chef.

Celebrity Chef Michael experienced the first verge of his life on 19th of September 1969. Embarking into the culinary industry, he took a job as a cook at Gepetto’s Ribs on Warren Rd.

Native of Cleveland, he grew up in a Sicilian family in Greek. Reared in North Olmsted, Ohio, he joined St. Richard School and then St. Edward High School. The aspiring chef joined the Culinary Institute of America in order to hone his cooking skills. Wedded to Liz Symon, the successful chef is taking care of his adorable step-child.

Before opening his own restaurant Lola, he worked in a number of restaurants including Player’s and Caxton Café. In 2005, the ambitious chef renamed Lola into Lolita and then set-up Lola in Cleveland the following year. That same year, he founded Parea, his third restaurant while the fourth restaurant Roast was established in 2008.

The highly talented chef and his restaurant have been honored with multiple accolades time and again. In 2007, he won the title of Iron Chef. That same year, Cleveland Magazine named him the Best Local Chef. For his talk show, he was awarded 2015 Daytime Emmy Awards. In a very short period of time, he has reached a height of success which every chef dream of.

An author of multiple cookbooks, Michael Symon is busy expanding his restaurant business at present.