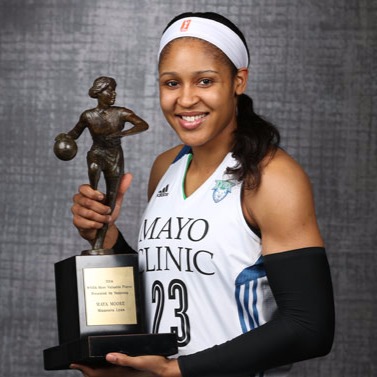 Maya Moore is a famous 23 jersey number small forward for the Women’s National Basketball Association (WNBA) team Minnesota Lynx. Maya is also heavily involved in the social media to keep their fans updated about the happenings in her life. She is the winner of Naismith Prep Player of the Year for the consecutive years of 2006 and 2007.

In the first three years of her basketball professional career in Minnesota Lynx, Maya Moore contributed to winning three championships out of the six possible trophies the team could have in those years.

Since 2011, Maya Moore has played each of the 34 games of WNBA seasons until 2016. However, in 2015, she didn’t play one game – perhaps because of a minor injury. Looking at her appearances on the number of games, it seems her health has favored her very well until now.

Likewise, in 2015, Moore played 10 games in the postseason. It makes 47 appearances in post-season games in 6 years. Moreover, she has also made it into the team to play against Chinese basketball team and in Euro League and Spanish Champions. According to 2015 tally, Maya earns a whopping salary of $120, 000 per year.

On June 11, 1989, Maya Moore was brought into this world by her father Michael Dabney and mother Kathryn Moore. She is a strict follower of Christianity.

According to the sources, Moore hasn’t been involved with any men. She has never been in the news for having a boyfriend or even for being seen with a guy in public.

Since the start of her professional career in 2011, she has been awarded a lot of awards as appreciations for her amazing basketball skills.