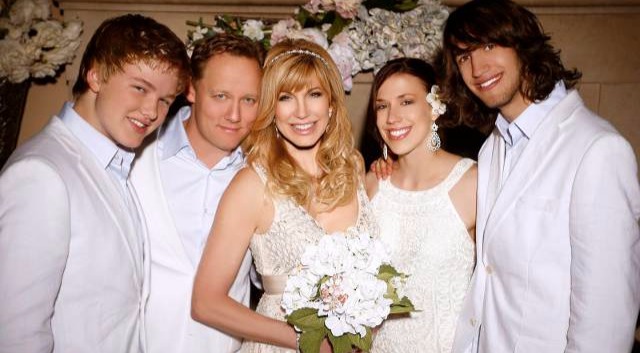 On 20 April 2011, Leeza Gibbons married to an actor, producer, and writer, Steve Fenton, who is 13 years younger than her. Though she has failed to prolong her three previous marriages, she seems happy with her fourth attempt. The couple seems happy with each other showing no signs of separation anytime soon.

Loving and supporting each other throughout the years, apparently, the couple is enjoying their happy feet together.

The wedding took place in a secret ceremony in Montage Hotel in Beverly Hills, the same place where the romantic twosome had their first date a couple of years ago. Only her three children: 21-year-old Lexi, 19-year-old Troy, and 13-years-old Nathan were the attendants.

The 51-year-old Gibbons said “I Do” tying the knot with the 41-year-old actor secretly. Feeling proud for having her toyboy as a husband she talked to People magazine, “We are living the fairy tale. We have so much respect for each other and grow stronger together….always so grateful to have been given another chance at love.”

Similarly, Steve added, “Leeza is the most kind person I have ever known. It’s that compassion that I see every day with her children. My life is complete now.”

String of failed marriages: Leeza Gibbons was an unsuccessful wife yet an amazing mom

Gibbons exchanged the wedding vows for the first time with John Hicks in 1980. With no chance for reconciliation, they separated just after two years of marriage, in 1982.

During the late 80s, she met Chris Quinten in New Zealand at charity fund-raiser. Smitten by each other at the first meeting, the couple soon took their relationship to a romantic level.

Finally, an actor and a journalist got hitched officially in 1989. However, her extra-marital affair with Stephen Meadows dissolved her second marriage leading to the official divorce in 1991.

That same year, she and Meadows began their conjugal life. Comparatively, the third marriage lasted longer than her previous two but it couldn’t prolong throughout her life, as the couple called it off, citing irreconcilable differences in 2005.

Leeza’s first marriage ended without the birth of any kids and she came to experience the sense of motherhood firstly with the birth of a lovable baby girl, Jordan Alexandra Gibbons “Lexi” with her second husband Quinten.

Though Lexi isn’t biological sister to the brothers Nathan and Troy, they have a cordial relationship with each other. Not to be missed, they supported their mom’s old age marriage. Troy and Lexi officiated the wedding becoming ordained ministers online whereas Nathan looked after the ring that represented the family of five.

Thrice-divorced Leeza Gibbon’s professional life contrasts from the personal one. However, currently, she is living a so-called “fairytale life” being married to her actor husband Steve Fenton. Fulfilling each and every responsible as a mom and a wife, Leeza Gibbons is now getting unbelievable support from her grown-up children and spouse.

Leeza Gibbons, marriages alongside her journalism career has dragged her into the media limelight. Four times married Entertainment Tonight co-host and correspondent is the mother of three children.

After the strings of unsuccessful marriages, American talk show host Gibbons married a man 13-years junior to her in 2011.