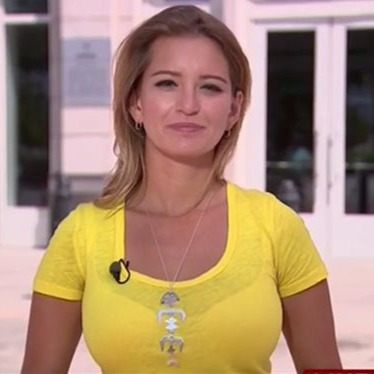 Katy Tur is a beautiful lady who has the perfect job as the broadcast Journalist in the renowned American television channel NBC News. Tur is someone very hard working as well. She can be seen all the time if you switch to the NBC on your TV. News, Early Today, Nightly News and few others fall in her department. She is a real, motivated and talented anchor-woman.

Katy Tur was born on October 26, 1983, and was raised in California. In her childhood, Tur had always been an active orator. She went to Brentwood school for her high school where she would frequently be engaged in various debates and speech competitions.

Then she got into the University of California, Santa Barbara for her undergraduate studies. Even in her University days, Katy was an active public speaker. She probably did the valedictorian speech for her class as well.

In the past, Tur has done works for various television channels and programs. Although very much competent on her speaking skills, Katy didn’t directly land on a prestigious job position in a big channel. However, she did some weather reporting, internships, radio news and small works with the local news channel to gather enough experience and confidence.

Then, in 2009, Katy Tur joined the worldwide famous channel NBC News. In her NBC career, Katy has worked as an anchor on many occasions. According to the record, she was the one covering the death of Cory Monteith and the research of the MH-370 plane crash. Her competence has given her an entry to the works of global significance.

Katy Tur was born to parents Marika Gerrard and Zoey Tur. Her parents have always been proud of her. She would always bring home trophies from the oratory competitions, and now, she is on TV speaking for the Americans every day.

Tur met Keith Olbermann in 2006. He is also into the broadcasting field as a sports commentator. The couple had much fun before they broke up after three years in the relationship. After the breakup in 2009, Tur’s personal life remained relatively covert. It’s rumored that she was dating an English man named Benoit while in London.