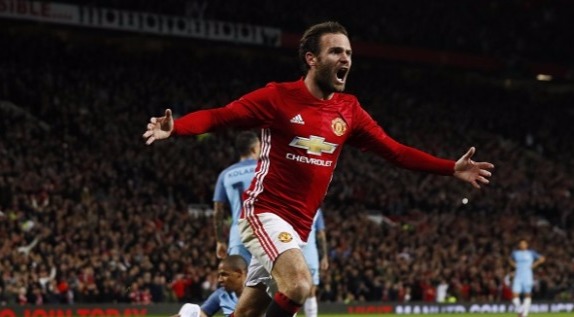 Wednesday night’s match mattered less for both Manchester clubs a week ago but after the misery they suffered at the weekend the derby on Wednesday was a must win for both.

United who shifted 4 at Stamford Bridge were in desperate need of a win as their manager Jose Mourinho was feeling the heat. Same can be said of Manchester City who came into this game on the back of a 1-1 draw against South Hampton. It is the first time that a team managed by Pep Guardiola has gone 5 without a win.

We lose together, we win together! Perdemos juntos, ganamos juntos! @manchesterunited #MUFC

United filed in a strong squad in comparison to Manchester City. United dominated the large part of the created some brilliant displays in the first half.

City looked the shadow of the side that won at Old Trafford in September. Although they at times pressed the United defense, they failed to force United goalie David Dea Gea to make any significant stop. United ended the first half on high. United winger Marcos Rashford could have put the host 1-0 up ahead before the interval but his shot was desperately blocked by City defender Nicolas Otamendi.

United came out early in the second half and began the half like they ended the first half. United’s attacks Ibrahimovic, Pogba, Mata and Rashford along with Ander Hererra pressed City’s defense which helped the United to gain possession in city’s half. Their effort paid and Pogba should have scored after Ibrahimovic delightfully played him on. Pogba on his weaker foot could only find the post instead of the goal.

The game became more open in the second half. United looked sharper of the two teams on the night. United dominated the early parts of the first half and deservedly took the lead after Spanish international Juan Mata slotted home Ibrahimovic’s pass.

The goal was Mata’s 3rd of the season. Mata, when he has started from the start, has delivered for United and he did not disappoint here as well. The victory ends a dismal week for United. While for City their poor run of form continues as they are now without a win in 6.

The win takes United through to the quarter-finals of the competition where they will face West Ham United, who overcame Chelsea with a 2-1 win at the Olympic stadium.

Manchester United welcomes Burley at the Theaters of Dreams, while Manchester City travels West Bromwich Albion. Both teams have ground to make up in the premiership title race and will surely put in a significant performance in the weekend.