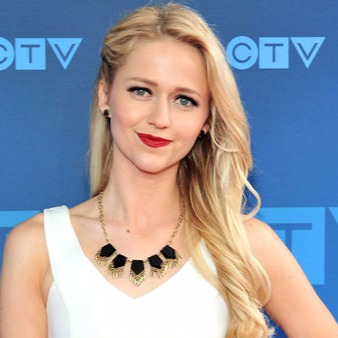 Johanna Braddy, American hottie in her late twenties has successfully carved her name in Hollywood with her breathtaking roles in the numbers of movies like ‘The Grudge 3’, ‘Easy A’, ‘Hurt’, ‘The Levenger Tapes’ and ‘Paranormal Activity 3’. She has also shared her familiarity in television playing a lead as Jenny Matrix in the hit web series ‘Video Game High School’ and dark comedy drama ‘Unreal’.

Johanna Braddy was born to be an actress

As Johanna Elizabeth Braddy, she was born on 30th August 1987 in Atlanta, Georgia, U.S. She was born to father Steve Braddy, an engineer, and mother Jo Beth, a vocalist and a pre-school music tutor.

Braddy was sent to McIntosh High School in Peachtree, Georgia, where she completed her graduation in 2005. Inclined to the entertainment world from an early age, she began attending theaters and school plays from the time when she had just learned to speak.

She had chosen her career a long back, at the age of three, after attending the performance of “Swan Lake”. Then she started taking ballet while also continuing jazz, tap, and point. She also attended theaters time-to-time.

It was 2004 when stunningly beautiful Braddy in her late teens kicked off her professional career taking a role of Olivia Harden in the ABC television film ‘Pop Rocks’. Later, she lent her voice to the character of Princess Yue in the ‘Avatar: The Last Airbender’.

While seeking for a major role, she gave her presence in with small parts in films like ‘Whore’, ‘Home of the Giants’ and ‘Broken Bridges’. She also continued with recurring roles in several television projects like FX drama ‘The Riches’, VH1 soap ‘Hit the Floor’ and ABC Family teen comedy drama series ‘Greek’. Likewise, she guest-starred on ‘CSI: Crime Scene Investigation’, ‘Cold Case’, ‘Suburgatory’, ‘Southland’ and ‘Shameless’.

After nearly half a decade of entering the film industry, she gained her first breakthrough role in a horror movie, the third installment of The Grudge franchise, ‘The Grudge 3’ (2009). The following year, Braddy she played a supporting role alongside Emma Stone in teen comedy ‘Easy A’. Afterward, she performed in other horror films like ‘The Levenger Tapes’, ‘Hurt’, ‘The Collection’ and ‘Paranormal Activity 3’.

Johanna became favorite among young teenagers for starring in the web-series ‘Video Game High School’ from 2012 to 2014. She was cast opposite Shiri Appleby and Constance Zimmer in lifetime dark comedy series ‘Unreal’. She appeared as series regular in ‘Quantico’, an ABC thriller in 2015.

Following the end of her married life, Johanna is dating her new boyfriend

Johanna met her future husband, Josh Blaylock on the set of ‘Video Game High School’ in 2012. The two soon converted their reel life romantic chemistry into a real one and married in November that same year.

Everything went well for the initial few months or a year, but it’s believed that the couple divorced sometime during 2014 or early 2015. No concrete details about their marriage annulment have been publicized.

Braddy confirmed her separation with Josh in June 2015. She took to Twitter to say that she is not married with him anymore but yet are great friends.

As of 2015 summer, she has been romancing Freddie Stroma, her ‘Unreal’ co-star. Several sources claimed that they are engaged since May 2016.

Elegance is another name of this American hottie

Fair complexioned blonde has enchanted many young fans throughout the world. 5 feet 7 inches tall magnificent lady has graced the glamor world with her enthralling body measurements of 32-24-34 inches. Her body weighs just 55 kgs, providing her with a skinny frame.