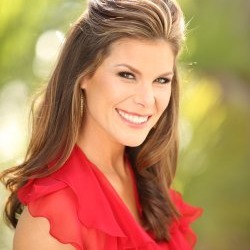 Jamie Little is a well-known American pit reporter. She is best known for covering popular family-owned and operated business venture, NASCAR on Fox. Jamie is also known for working as pit reporter on ESPN’s Motoworld program.

The famous reporter started her reporting career at just 21 years of age. Her initial work experience at media network came for ESPN in 1998. While serving for ESPN, she covered Winter and Summer X Games.

In January 2010, she made an official announcement through her website that she would be returning to Winter X Games. After starting to work for Winter X Games, she covered the Snowmobile motocross.

Apart from serving as a pit reporter, she also held hosting duties for the popular ESPN network’s second annual New Years, No Limits Special. On 25th September 2014 it came into news that Jamie would be joining FOX Sports to serve as NASCAR pit reporter which would be beginning in January 2015.

She was announced to work as NASCAR reporter for the several stock car racing series like Sprint Cup Series, Camping World Truck Series, and Xfinity Series.

In addition to her work experience as a pit reporter, she has also been featured in several movies. Her most noticeable movie role came as X-Games Reporter in 2004 released movie titled Fantastic Four.

Besides this, she is also popular for making an appearance as an announcer in 2014 movie titled At The Top of The Pyramid.

Jamie has also written a book titled Essential Car Care For Women which she has co-written with Discovery Channel’s Turbo Expert named Danielle McCormick. The book is basically written for the women who doesn’t care much about maintenance of the car.

Jamie Little is married to medical implants marketer, Cody Selman. She got wed to him in December 2010 in La Jolla, California. After 2 years of marriage, she delivered a baby boy named Carter Wayne Selman on 9th August 2012.

She has not opened up more about her personal life. Since there is not any news published about her divorce, she is still believed to be passing out days happily with husband Cody Selman.

Currently, she is living splendid moment with her family in Las Vegas. Jamie and her hubby Cody also own Jimmy John’s Sandwich Shop franchise in Las Vegas.

Jamie Little is serving as a pit reporter for the Fox since last year where she was appointed to cover several racing series Spring Cup, Xfinity and Camping World Truck Series.