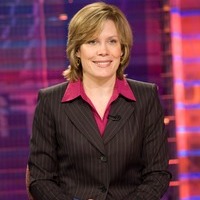 Chris McKendry is an American journalist who has been serving for ESPN since 1996. Besides working for ESPN, the beautiful journalist has previously served as a co-anchor of SportsCenter show. Her stint with ESPN has seen her host the live events as the Australian Open, French Open and the US Open along with the Wimbledon.

Chris McKendry was born as Christine McKendry on 18th February 1968 in Philadelphia, Pennsylvania. She enrolled in Archbishop Ryan High Scholl for her secondary education. While in her school days, Chris was considered to be one of the best students.

Since childhood, she had a firm interest in Tennis and her love for tennis landed her a scholarship at the Drexel University in 1990. While in her college, she was one of the best both performers in Tennis and in her academics. Chris graduated from the university with a degree in humanities.

The talented journalist who has been a success in her professional career have been equally successful in her personal life as well.

Speaking about her personal life, the beautiful journalist mentions herself as a happily married woman.She is married to husband Eduardo Andrade. The couple is now parents to their two children, whose identity is yet not uncovered.

In her long-standing marital life, the journalist has not encountered any controversy related to extra-marital affairs. Thus, divorce seems miles away from her happy paradise.

Since after her university days, Chris knew what she wanted to take as a profession. Consequently, she began her professional career through WJLA-TV affiliated with ABC in Washington DC. There she served as a sports reporter.

Her television debut came in 1996 while she was a sports anchor. Besides anchoring Sportscasters, Chris has been associated with a variety of other assignments which includes Wimbledon 2007’s late night host and the coverage of the US open from 2002-2006.

Her decorated career has seen her take a role of co-host of Winter X games, sideline reporter at ESPN, ESPN2 and sports broadcaster for ABC during the FIFA women’s world cup in 1999.

Besides her stint in the television, McKendry has also worked for a short spell as a columnist for ESPN titled “Page Two” in 2001. Her contribution in the field of Journalism was recognized by the regional sports Emmy Awards.

It’s been decades since McKendry made her debut in the field of journalism. Since her debut, she has broadcasted several shows and events. Her talented and hardworking nature has seen Chris receive a handsome amount of salary considering her true dedication towards journalism.

The actual amount that Chris receives as a salary has not been mentioned yet but her salary definitely has a huge hand in making up her net worth which is estimated to be around 2.3 million dollars.

Age is just a number for the beautiful television personality

Chris McKendry is now nearing the age of 50. Even However, her growing age has not stopped the reporter to look beautiful. Her charming personality and the admirable height of 5ft 3 inches makes her one of the good looking personalities in the TV industry.

Beautiful by appearance, Chris is also blessed with an attractive figure. Her body measurements are reported to be 34-24-36 inches. Moreover, her beautiful pair of legs and classy looking feet add extra charm to her personality.