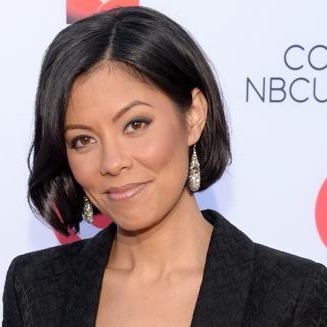 Alex Wagner, a liberal political commentator, is a former anchor who worked for MSNBC. She is best known as a host of her own show Now With Alex Wagner that aired on MSNBC.

Born on 1977, Wagner is currently 38 years of age. Her birthday falls on the 4th of December. According to her birth date, her birth sign is Sagittarius.

She was a student at Woodrow Wilson High School and later enrolled at the Brown University, graduating in 1999.

Initially, she was the cultural correspondent at the Center for American Progress. She was then hired as editor-in-chief in 2004 by The Fader magazine and served till 2007.

In 2007, she started serving as the executive director of a project called Not On Our Watch and traveled different places like Burma, Zimbabwe and Sudan to stop and prevent mass atrocities.

Alex was then oriented in a political news magazine, Politics Daily for which she worked as the White House correspondent. Later, she got involved with Huffington Post as a reporter.

Then after, she was seen as an analyst on programs The Last Word With Lawrence O’Donnell and Countdown With Keith Olbermann on MSNBC.

It was on 14th November 2011 that Wagner started hosting her own show Now With Alex Wagner. Unfortunately, the show was ended on 30th July 2015 and later Alex was announced to host a weekend program but this decision was never implemented.

Recently on 26th April 2016, Wagner was announced to be leaving MSNBC to work as a senior editor of The Atlantic magazine.

Alex is an American citizen born in Washington D.C. She is the daughter of Carl Wagner and Tin Swe Thant.

Her father is of Irish and German descent and her mother is an immigrant from Myanmar. She is a follower of Roman Catholic religion.

She is married to her long-time boyfriend, Sam Kass. Former Senior Policy Advisor for Nutrition Policy for President Barack Obama,Sam was also an Executive Director for Let’s Move! campaign which was First Lady Michelle Obama’s campaign. He also served as Assistant Chef for the President.

They got engaged on September 2013 and later got married on 30th August 2014. The nuptial took place in Pocantico Hills, New York.

The Obama family also attended their wedding ceremony. After marriage, the couple moved to Brooklyn, New York. They don’t have any children. No rumors of affair or divorce have occurred.

Alex Wagner is a gorgeous lady with a slim body of measurements 35-25-35 inches. Her slim figure, a remarkable height of 5 feet 8 inches and suitable weight of 59 kg just add the cherry on the cake.

Her successful career has earned her a net worth of $3 million as her yearly salary is estimated to be $400 thousand.

Wagner is currently serving as a senior editor of The Atlantic magazine. She is living happily with her husband in New York and has been wisely juggling her personal and professional life to live a sound married life.

Alex is interactive on social networking sites with her fans. She consistently posts pictures on Instagram and tweets on Twitter @alexwagner. More on Alex Wagner’s life and family can be found on the internet.